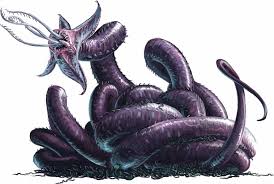 Dwelling only in the deepest reaches of the underworld, the immense neothelids once ruled empires in the depths and were worshiped as gods, yet their numbers have been vastly reduced as other races have proven swifter to breed and adapt. Today, the neothelid is a legend, the subject of tales of horror among those few to have experienced the creature’s wrath in person and lived to tell about it.

Neothelids are served by all manner of strange worm-like creatures, minions they use to observe and wage war against their enemies. The neothelids themselves were spawned by even more horrific entities, ageless horrors from strange dimensions beyond the edge of known reality—the neothelids see themselves as the chosen agents of these malevolent forces, working to ready the world for their return.

Neolithid’s have been known to enter a hibernation were they transform their outer skin to a hard substance almost like stone, in this way they can survive for centuries without need for sustenance. It believed they call this state “The Dreaming”. The substance is almost impossible to penetrate with magic/psionics or magical materials.

They once had a mighty subterranean empire, but were overwhelmed by the neighboring races which bred much faster. The result was near-extinction, which for a long time caused them to concentrate solely on the survival of their race. During this period, they were attacked by the intellect devourers of Ilvarandin, but successfully repulsed the invaders.

Abilities
Neothelids are physically impressive foes. They can exhale a cone of acid capable of reducing a group of powerful warriors to a steaming ruin. A neothelid’s barbed tongues inflict grievous wounds, and can also drag prey into the creature’s hungry maw.

They are also surprisingly mobile, using their psionic abilities to fly without wings and to teleport around the battlefield at will. Their lack of hands does not impede them, as they can readily move objects using the power of their minds alone. They can also communicate telepathically.

Those who decide to escape a neothelid by teleporting away may find to their cost that the creature has a strange ability to gain an inkling of the intended location of the teleport. The neothelid can sometimes use this knowledge to pursue its foes by using its own teleport ability.

Their hide resists blows unless cold iron weapons are used, and they can often shrug off the effect of spells against them unless the caster is particularly powerful.
They can also overwhelm the minds of foes (sometimes with fatal effect), and influence the actions of the weak willed.

Habitat and society
The ecology of the neothelids is a mystery. It is believed they were spawned by horrific entities existing outside the boundaries of reality. They are found singly or in small groups, and often have minions almost as horrific in appearance as themselves.
They worship the ancient entities that exist in the depths of the Dark Tapestry: Yog-Sothoth, Azathoth, and others.

On Golarion
The neothelids of Golarion primarily inhabit the Darklands.