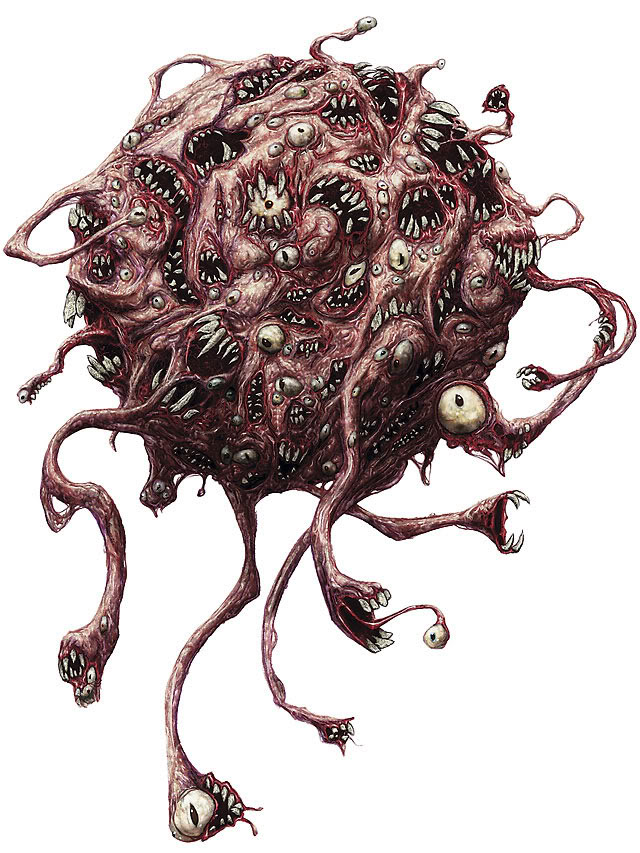 Description
These hideous masses of floating flesh appear to be covered with staring eyes and hungry mouths. The lesser gibbering orb is a pulsing mass of sickly black and reddish flesh, roughly 8 ft. in diameter. The orb seems to fly in starts and fits, but this is a ruse, for the creature is nimble for its bulk. It may be a distant cousin to the eye of the deep or similarly-orbed entities.

The lesser gibbering orb is either a version of the gibbering orb, or so similar it makes no difference for naming purposes. These odd beasts are not quite the force of nature their larger brethren are, but they are every bit as chaotic and hungry as the larger version. These creatures are very distinct, and no two lesser gibbering orbs encountered are the same, if the encounter is survived at all!

The gibbering orb has the ability to bite its foes by extending a pseudopod with one of its mouths protruding from the end. The orb can extend two of these at any one foe, or a total of six in any given round. At the same time, the legions of eyes have the ability to cast a host of spells/ powers at a rapid rate.

Vision: All Around Vision, True Seeing